This amazing photo captures Rene Vietto and Federico Ezquerra at the start of the Col de Portet d’Aspet climb. A day and a climb of legendary Tour de France history.

Rene Vietto led the peloton over the first two mountains, with his team leader Antonin Magne (race leader) and Giuseppe Martano (second overall) closely following. On the descent of the Portet d’Aspet, Magne crashed and broke his rear wheel. Vietto was unaware of this and continued. When Vietto reached the bottom, a Tour course marshall informed him that his team leader had crashed. Lapébie was far ahead, and all the other French cyclists were far behind, so Magne was without support. Vietto then turned around and rode back up the mountain. When he reached Magne, Magne took Vietto’s bicycle and rode down. When Magne reached Lapébie, who had waited for him, they worked together and caught Martano. Vietto had to wait for the service car to bring him a new bicycle and finally finished four minutes behind Magne, Martano, and Lapébie. Vietto was not happy with what had happened, and he said that Magne did not know how to ride and that Lapébie should not have been so far ahead. Magne on the other hand was grateful for what Vietto and Lapébie did to preserve his lead.

The 1934 Tour de France was the 28th edition of the Tour de France, taking place from 3 to 29 July. It consisted of 23 stages over 4,470 km (2,778 mi). The race was won by Antonin Magne, who had previously won the 1931 Tour de France. The French team was dominant, holding the yellow jersey for the entire race and winning most of the stages. Every member of the French team won at least one stage.

French cyclist René Vietto rose to prominence by winning the mountains classification, but even more by giving up his own chances for the Tour victory by giving first his front wheel and later his bicycle to his team captain Magne.

The major introduction in 1934 was the introduction of the individual time trial (ITT). There had been time-trial-like stages before in the Tour de France, but they had been run as a team time trial. Since the format of the Tour de France changed in 1930 from trade teams to national teams, the Tour organization had to pay for the housing, travel, and feeding of the cyclists. The organization received the money from the sales of l’Auto, the newspaper that organized the Tour. l’Auto was a morning newspaper, while one of its competitors, Paris-Soir, was an evening paper. Paris-Soir was also following the race and was able to publish the results the same day, while l’Auto had to wait for the next day, publishing old news. To counter this, the stages in the Tour de France had started later, so they would end after Paris-Soir had to print their newspapers. The Paris-Soir sports editor had countered this by starting his own race, the Grand Prix des Nations, run as an ITT. The first edition in 1932 was not received well by the cyclists, but from 1933 on it was a success. The tour director Henri Desgrange saw the success of the French cyclists in the Grand Prix des Nations and adapted the individual time trial format in the Tour. Not all cyclists were happy with the ITT. René Vietto, a climber, said it was a dull test of horsepower, while a bike race should also test the head. Other cyclists said the ITT would negate the effect of good teamwork.

As was the custom since the 1930 Tour de France, the 1934 Tour de France was contested by national teams. Belgium, Italy, Germany, and France each sent teams of 8 cyclists each, while Switzerland and Spain sent a combined team of eight cyclists. In addition, there were 20 individual cyclists; other than in 1933, they were no longer racing under the title “touriste-routier” but as “individual”. In total this made 60 cyclists.

The French team of 1934 consisted of all good riders, with the core of the team being the winner of the 1933 Tour, Georges Speicher, Roger Lapébie, former winner Antonin Magne and Maurice Archambaud, who had performed well in 1933. The French selectors were criticized for selecting René Vietto, a twenty-year-old rider who had only won some small races. The Italian team now included Giuseppe Martano, who had ridden as a touriste-routier in 1933. The Belgian team, which normally included some big contenders, was lackluster. 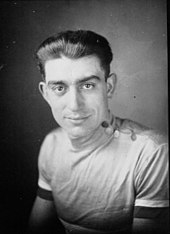 The first stage was won by 1933 winner Speicher who again wore the yellow jersey. In the second stage, he lost his lead as there was a split, with Speicher in the second part and Magne in the leading group, and Magne took over the leading position.

In the fifth stage, Le Grevès and Speicher finished close together. After examining the photo finish, both cyclists shared the time bonus, although Le Grevès was named the winner.

After Stage Six, before the heavy climbing in the alps, Magne was leading with almost 8 minutes on second-placed Martano. In the alps, Vietto was the best. He won stages 7 and 9 and climbed to third place in the general classification, half an hour behind Magne. Had he not lost 40 minutes in the first two stages due to flat tires, he would have been the leader of the race. Martano had been able to reduce the margin to Magne to 125 seconds.

Stages 12 to 14, between the Alps and the Pyrenees, were won by French cyclists, without important changes in the general classification. In the Fifteenth Stage, Magne attacked on an early climb, but Martano did not drop. The big climb of the day was the Puymorens, and Vietto lead while Magne and Martano followed. On the way down, Magne crashed on a pothole and broke the wooden rim of his front wheel. Martano saw his chance and raced away. Magne asked Vietto for his bicycle, but Vietto only gave him his front wheel. Magne’s frame had been bent in the crash, so when Speicher, the next French cyclist, showed up, Magne took Speicher’s bicycle. Vietto had to wait several minutes to get a new front wheel and lost all chances for the stage victory. A photographer was present to take a picture of Vietto, weeping with a bike without a front wheel. When this picture was published, the cycling world was touched, and newspapers proclaimed him “Le Roi René” (King René).

In the Sixteenth Stage, things got worse for Vietto. He was first over the first two mountains, with his team leader Magne and Martano closely following. On the descent of the Portet d’Aspet, Magne crashed again and broke his rear wheel. Vietto was unaware of this and continued. When he was down, a Tour course marshall informed him that his team leader had crashed. Lapébie was far ahead, and all the other French cyclists were far behind, so Magne was without support. Vietto then turned around and rode back up the mountain. When he reached Magne, Magne took Vietto’s bicycle. Magne rode down, reached Lapébie who had waited for him, and together they caught Martano. Vietto had to wait for the service car to bring him a new bicycle and finally finished four minutes behind Magne, Martano, and Lapébie. Vietto was not happy with what had happened, and he said that Magne did not know how to ride and that Lapébie should not have been so far ahead. Magne on the other hand was grateful for what Vietto and Lapébie did.

In the Seventeenth Stage, Magne was able to get away from Martano who broke his frame, and finished 13 minutes ahead of them while winning the stage. Magne now lead with almost 20 minutes. In the Eighteenth Stage, Magne lost four minutes to Martano. It could have been more, had not Vietto and Lapébie collected the time bonuses on the mountains and the finish.

In the next flat stages, nothing really changed the general classification except the Stage 21 Individual Time Trial. Magne won there, increasing the margin to Martano by 8 minutes. Vietto had won back enough time to end in fifth place in the general classification, and won the mountains classification. Magne had ridden consistently in the entire Tour and had benefitted from his team support. He won his second Tour de France, the fifth in a row for France.