Authentic 1987 Giro d’Italia Pennant.
Presented by the Giro race organization and La Gazzetta dello Sport to VIP guests.
This beauty is still in the original protective sleeve. The ornate gold fringe is in perfect shape!

The 1987 Giro was won by Irishman Stephen Roche of the Carrera Jeans–Vagabond team. Second and third places were taken by British rider Robert Millar and Dutchman Erik Breukink, respectively. It was the second time in the history of the Giro that the podium was occupied solely by non-Italian riders. Roche’s victory in the 1987 Giro was his first step in completing the Triple Crown of Cycling – winning the Giro d’Italia, the Tour de France, and the World Championship road race in one calendar year – becoming the second rider ever to do so.

Roche’s teammate and defending champion Roberto Visentini took the first race leader’s maglia rosa (aka pink jersey) after winning the opening prologue, only to lose it to Breukink the following stage. Roche took the overall lead after his team, Carrera Jeans–Vagabond, won the stage three team time trial. Visentini regained the lead for a two-day period after the stage 13 individual time trial. The fifteenth stage of the 1987 Giro has been recognized as an iconic event in the history of the race because Roche rode ahead of teammate Visentini, despite orders from the team management, and took the race lead. Roche successfully defended the overall lead from attacks by Visentini and other general classification contenders until the event’s finish in Saint-Vincent. 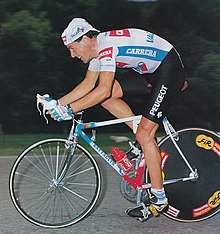 Stephen Roche (pictured during the 1987 Tour de France) won the Tour and the men’s road race at the UCI Road World Championships in the same calendar year.

Upon completing the final stage, Roche told the media that by winning the final time trial he felt he silenced any critics who doubted whether he should have won the race.  In addition, Roche announced his intention to compete in the Tour de France in July.  He won the Tour with a margin of forty seconds over the second-place finisher and thus became the fifth rider to win the Giro and Tour in the same year. In September, Roche won the men’s road race at the 1987 UCI Road World Championships and became the second rider to achieve the Triple Crown of Cycling, which consists of winning two Grand Tour races and the men’s road race at the UCI Road World Championships in a calendar year. For his career successes in the Giro d’Italia, Roche was inducted into the race’s Hall of Fame in 2014. After dropping out of the 1987 edition of the Giro, Visentini did not win any further stages or classifications in major races, and retired from cycling in 1990, at the age of 33.

La Repubblica stated that the Italian riders had the second worst performance in the history of the Giro after 1972, since none finished inside the top four and many famous Italian cyclists failed to complete the race.Mario Fossati, of La Repubblica, thought that van der Velde and Bernard performed very strongly, along with Argentin, who he said was operating on “alternating current”.] Fossati also said that Cimini and Calcaterra could have promising careers, based on their efforts during the race.

The 1987 Giro has become famous for the series of events involving teammates Roche and Visentini Many writers highlight the fifteenth stage as the defining moment of the race. The Corriere delle Alpi and cycling book author Bill McGann even named it as one of the most famous in the Giro d’Italia and cycling history. On that day, Roche – who was second in the general classification and over two minutes behind race leader Visentini – attacked the lead, despite orders from his team to stop. Upon completing the stage, Visentini told the press that either Roche or himself would not start the following day,  while Roche independently held a press conference from his hotel and answered questions. Carrera Jeans-Vagabond manager David Boifava ordered Roche and Visentini to stay silent. The following day, many Italian newspapers called Roche a betrayer or cheat for his actions. Visentini’s statement, both riders started the sixteenth stage after receiving orders from Carrera company boss Tito Tachella. In the days that followed, Italian fans threw things and spat at Roche, which led him to receive police protection until the race’s conclusion.  Looking back on the incident, Roche claimed that he just descended the mountain quicker than Visentini and did nothing wrong, while Visentini maintained that Roche attacked him when he should have been aiding him. Visentini accused Roche of dashing the team’s morale and strategy ,but some critics believed that Roche’s actions were acceptable because he was the stronger rider.

This is a one of a kind item, please review the photos carefully to determine condition