This awesome image captures an otherwise routine moment of a race but does so in a very composed and striking manner. It shows De Vlaeminck riding away from the camera while his wife, Marleen, in a dress and heels, passes up what appears to be a glass bottle of water, or perhaps wine, to take the edge off his pain.

De Vlaeminck wore the green jersey at the 1971 Tour de France from Stage 3 until he lost it at Stage 7 to Gerban Karstens. Unfortunately, De Vlaeminck crashed hard and rode heavily bandaged for a few more stages until the pain became unbearable, and he abandoned at Stage 11.

Printed on 140-pound Mohawk paper by AMP in Dublin, California on a Heidelberg Speedmaster press.

The print features a debossed bevel edge and embossed Horton Collection Logo. The debossed and embossed print has a beautiful finished look, it is ready to go straight into a frame. No mats needed.

Read more about the story of this amazing image below.

A couple of months before Covid-19 turned the world on its head, I had the incredible opportunity to spend a couple of days with Roger De Vlaeminck at his home in Eeklo, Belgium, about 30 minutes outside Ghent. He lives on a farm in a picturesque part of Flanders, leading you to think little has changed in Eeklo over the past 100 years. De Vlaeminck’s surroundings certainly fit the personality of a man who 50 years ago ruled the foul-weathered spring classics of northern Europe. To this day, at 73,  he remains incredibly fit, and his gaze speaks volumes. My guess is he can still rip the legs off riders 25 years his junior.

I had met Roger a few times over the years, but those encounters were so casual I doubt he ever remembered meeting me. To help bridge the meeting at his house to sign our latest lithographs, famed Dutch cycling photographer Tonny Strouken and his son Patrick paved the way by convincing Roger to tolerate me for a couple of days.

After being buzzed in through the front gate, I pulled into the driveway at Roger’s home an hour ahead of Patrick Strouken. Roger was a bit pensive, as he perceives his English is not very good. I assured him his English was much better than my Dutch, which is limited to asking for beer and the toilet.

After meeting his dog Snoopy and taking in the sights of his farm, we unpacked my car, set things up, then did what Belgians do best — we had a beer. For the next hour, we just sat there yapping the day away. I am beginning to feel like a broken record, but for me, the best part of these extended visits with legendary cyclists is getting a glimpse into the person behind the public image.

Our lively discussion continued for two days. Having Patrick, a family friend of the De Vlaemincks, in the room helped the conversation flow. At the time, Roger had just returned from an extended and well-publicized hospital stay. He was tired and still recovering, but as a commensurate professional, he did his best to plow through the task at hand and signed most of the lithos I had shipped to Belgium. A stack remains unfinished but will be signed once I travel to Europe in the post-Covid world. 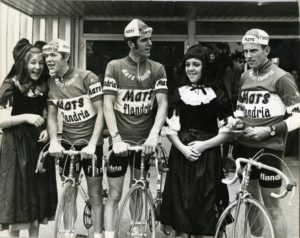 Roger raced as a pro for 16 seasons, from 1969-1984, and was an absolute beast during the 1970s. Mention the name Roger De Vlaeminck and the race that first comes to mind is Paris-Roubaix. He won it a record four times. He also hit the victory punch card at all the monuments, one of only three riders to do so. The others were Eddy Merckx and Rik Van Looy. It must be something in the Belgian water. Often overlooked in the American press is the fact that he won stages in all three grand tours, including 22 at the Giro d’Italia, which he raced nine times. And he just so happened to win the overall at Tirreno-Adriatico six years in a row.  The fact that he was also the world cyclo-cross champion in 1975 sheds light on bike-handling skills that come in handy on those springtime cobblestones covered in mud and moss.

Roger last put on a pro jersey nearly 40 years ago. But like many of the pros of his era, he remains a hard-core fan of current racing. When I arrived, he was watching a recording of a race from earlier in the year and dissecting what he felt was a rider’s clear misread of the race, causing that rider to miss a critical break. Over the two days, I spent with him, I got a small window into Roger’s personality, particularly as it relates to cycling. I thoroughly enjoyed his perspectives on current riders, race organizers, the UCI, technological innovation, and race tactics. I doubt I would feel the same if I were on the receiving end of some of his viewpoints. He is at a station in life where he is comfortable in his skin and doesn’t seem to care if someone chooses to agree or disagree with his opinions. 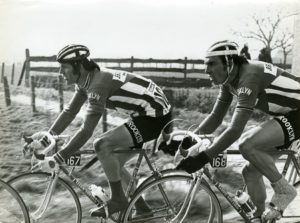 Roger does not attend many races in person. He seems to prefer the quiet life of a gentleman farmer. I got the impression that he enjoys commenting to the press and seeing the competitive side of cycling from the comfort of his living room couch. He continues to despise France, an opinion formed years ago; he sees driving to Ghent as a significant inconvenience; and he still loves the sight of a pretty woman.

A meme popular in Belgium is “In den tijd van [in the days of] Roger De Vlaeminck” From what I understand, this moniker evolved after several years of his denigrating several of the past decade’s riders as being fragile. There is no shortage of quotes on how he feels about Tom Boonen, a rider with whom I enjoy a friendly relationship. I gave him a little bit of shade by asking him if these targeted riders were, in fact, wimps or if he was envious he didn’t ride in an era with higher earnings. Pausing, he said both, but mainly that most contemporary riders were not hard men. He laughed when I explained the American concept of looking through rose-colored glasses.

As we worked together, he began signing the lithos with personal inscriptions. He wanted to know something about several of the folks who had ordered the personalized litho version. He paused each time one was for a lady. Roger loved that women in Finland, the US, and Australia, even knew who he was, let alone they would hang a print of him in their home or office. He got a kick out of the ones I had him inscribe for unsuspecting friends of mine. Those “special” inscriptions were generally letting the recipient know they were overweight, needed to ride more, eat less, or offering condolences to them for being so ugly.  Men have strange relationships.

After a few hours, Roger was fading. I finally called it a day. Immediately he became concerned he wouldn’t be able to finish the lithographs he had agreed to sign. I somewhat relieved his angst by reinforcing quality was significantly more important than quantity, and we would pick things up where we left off the next morning. I had brought stacks of two prints for him to sign.  On the first day, we focused on a spectacular Tonny Strouken image of Roger descending in a madman at the 1976 Milan-San Remo wearing his iconic Brooklyn team jersey. 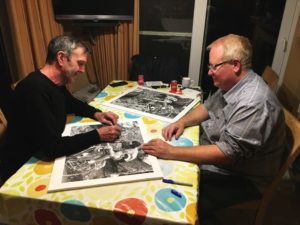 Day two shifted to a more subtle but extremely compelling shot of Roger from our personal collection. There are no markings on the back of the original physical print, so a bit of identification work was necessary. It was apparent the race was from the summer and seemed likely to be from the Tour. After tracing the bib number, it became clear this was from the 1971 Tour de France. Roger wore the green jersey from Stage 3 until he lost it at Stage 7 to Gerban Karstens. Unfortunately, Roger crashed hard and rode heavily bandaged for a few more stages until the pain became unbearable, and he abandoned at Stage 11.

This awesome image captures an otherwise routine moment of a race but does so in a very composed and striking manner. It shows De Vlaeminck riding away from the camera while a woman in a dress and heels passes up what appears to be a glass bottle of water, or perhaps wine, to take the edge off his pain. The more I looked at that image, the more intrigued I became. I’m not sure if the image has ever been published.  Over the years, every person I showed this to seemed to like the shot but could not name the woman. In the end, I didn’t care and decided it would make a great print, and thought perhaps once in front of Roger, he might shed some light. 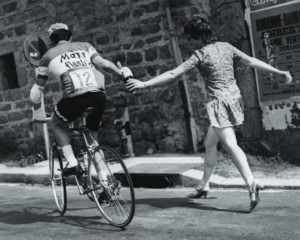 Sitting in his dining room, I unpacked the print with the bottle pass-up. He looked at it with a measured level of recognition but was not sure of the woman’s identity as she is slightly turned away from the camera and wearing sunglasses. He suggested it had to be someone he knew and trusted. First, the bottle has a visibly broken seal.  Tampering with beverages was relevant in the 1970s, and riders were very reluctant to take drinks from unknown fans. Second, it was the woman herself. Here was a lady to had the skill to run in heels and do a perfect pass-up.

Patrick Strouken began to chuckle. He had looked closely at the print the day before and send a mobile phone image of it to his father, Tonny. He had no idea who the woman might be either. As luck would have it, Tonny’s wife happened to be next to him when the text message arrived. She burst out laughing. Neither Patrick, Tonny, or even Roger recognized the Strouken family friend: Marleen De Vlaeminck. It turns out this was a photo that featured Roger’s first wife! Up closer inspection, Roger agreed it was his ex. I asked him how he knew. His response was a matter of fact: “Killer Legs.”

We continued with the signing as planned. After another hour, we took a break. I wanted to revisit the image and the events of the race. Roger affirmed it was tough riding, and he remembered more about the pain he was experiencing than the race itself. He then spoke about Marleen and how she would visit the races from time to time. He too had been drawn to the image.

Getting to spend time with Roger De Valeminck at his home was fun and I look forward to seeing him again soon and having the remaining prints signed. As a near life-long racing enthusiast, it is refreshing to know that virtually all of the wildly successful ex-pros I have met are, at their core, just like me: fanboys. 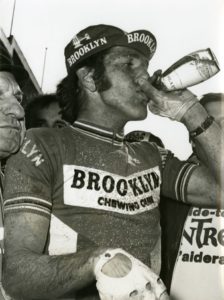 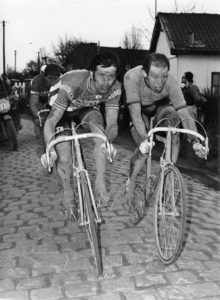