Andre Chalmel finishes third behind Walter Godefroot and Hermann Van Springel at the 1976 edition of Bordeaux-Paris. While not victorious in 1976 Chalmel would go on to win Bordeaux-Paris in 1979.

These beautiful large-format original press photographs are directly from the archives of Miroir du Cyclisme and Miroir-Sprint.  The reverse of each photo bears the Miroir markings as a road map of its history and authenticity. The images are all stamped by either Miroir du Cyclisme or Miroir-Sprint; many have publication crop marks or show the page and magazine issue the photo was used in.  Some even bear a unique stamp with the name of the photographer.

Miroir du Cyclisme was a French monthly magazine, a photo-focused wonderland of cycling news and historical articles for 35 years, from 1960 to 1994. The companion publication, Miroir-Sprint, came out weekly and reported on news of various sports from 1946 to 1971. In the era before streaming and on-demand viewing, publications like Miroir were how fans kept up on racing results, followed their favorite riders, and stayed current on all things cycling.

Renowned cycling photographers Henri and Marcel Besson, Jean Jaffre, Louis Lucchesi, Roger Monnet, Roger Touchard, and others were featured prominently in both publications, and works from these important photojournalists are included in the selection offered here.

Maurice Vidal founded the magazine and ran it until he died in 1992, which directly contributed to its long-time consistent look and feel.

The issues of both these publications are a treasure trove of cycling history; art and photographs are very collectible among cycling fans.

As the photographs are quite old and one of a kind, please look carefully at the photos to determine the condition.

The Bordeaux–Paris professional cycle race was one of Europe’s classic cycle races, and one of the longest in the professional calendar, covering approximately 560 km (350 mi) – more than twice most single-day races. It started in northern Bordeaux in southwest France at 2am and finished in the capital Paris 14 hours later. The professional event was held from 1891 until 1988. It was held as an amateur event in 2014.

The event was first run on 23 May 1891, and the Derby of the Road as it was sometimes called, was notable in that riders were paced – allowed to slipstream – behind tandem or conventional cycles. From 1931, pacing was by motorcycles or small pedal-assisted Dernys. Pacing was also briefly by cars. In early events, pacing was provided from Bordeaux. In later events, it was introduced part-way towards Paris. From 1946 to 1985, more than half the distance was paced, Dernys being introduced at Poitiers or Châtellerault, roughly half-way.

The organizers of the inaugural event, Bordeaux Vélo Club and Véloce Sport envisaged that riders might take a few days, but the first edition was won in a continuous ride by George Pilkington Mills. Mills raced through the night to win the 600 km long event in just over a day. Post-war winners include Louison Bobet (1959), Tom Simpson (1963), and Jacques Anquetil (1965). The record for the most victories is held by Herman Van Springel, who won seven times between 1970 and 1981. 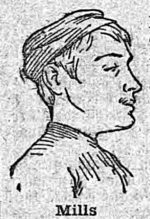 George Mills won the inaugural Bordeaux–Paris race in 1891. He was invited by the organizers, the newspaper Véloce Sport because of his reputation in an age when long-distance racing was the fashion. A race from Bordeaux in the south-west to the capital in Paris would be the longest annual event in France.

The race started at 5am in the Place du Pont Bastide in Bordeaux. There were 38 riders. As well as the British – Pilkington Mills, Holbein, Edge and Bates – there were a Pole and a Swiss. Mills fell on bad roads after 10 km when he touched with the Frenchman, Jiel-Laval, but neither was hurt. The English group moved to the front when the field began to straggle after the first hour. They led by a mile at dawn after averaging 14 mph. The historian Victor M. Head wrote: “At 10.30 Angoulème was reached and the Englishmen stopped to gulp down bowls of hot soup. When they restarted, Mills began to make all the running, drawing steadily away from his companions until, arriving at Ruffec, Charente, he was half an hour in the lead.”

The rapid departure surprised the organisers. A report said:

Everything had been prepared to receive the riders properly [recevoir dignement]: full meals, baths, hot showers, nothing was forgotten, and there were good beds to welcome our heroes, because there was no doubt among the excellent people of Angoulème that it was impossible to ride 127 km on a bicycle without immediately needing several hours’ rest. To the great stupefaction of the spectators, not one of the riders took advantage of what had been provided. The eventual winner, G.P. Mills, stopped for several moments at best. He had a plan: he let Holbein eat peacefully at the control because he knew that a real champion, Lewis Stroud, was waiting to show him the way out of town and that, with him as a precious, fast and durable pacer he could build up the lead he needed to win the race.

Mills reached Tours after 215 miles and more than 12 hours on the road. He rested for five minutes, ate raw meat “and a specially prepared stimulant”, and set off an hour ahead of the other British riders. “By now,” said Head, “the Frenchmen were hopelessly out of the running.” He wrote:

Although the judges, the officials, and the large crowd had been waiting impatiently for three hours before the winner’s weary, mud-caked figure was seen coming along the boulevard de la Porte Maillot, his reception was “wildly enthusiastic”, as one writer put it, and he was escorted in triumph to his hotel. The time of 26h 36m 25s was truly remarkable when one considers the appalling road conditions, poor weather, and the delays, and all the other hardships encountered. The British victory was complete as Montague Holbein (27h 52m 15s) came in second, with Edge, nearly three hours away, third, and Bates fourth.

The Bicycle Union – later renamed the National Cyclists Union – had strict views about amateurism and had demanded its French equivalent ensure that all taking part met its own amateur ideals. Only then would the NCU allow Mills and other British amateurs to take part. When Mills won, the Bicycle Union realized he was the works manager at a bicycle factory and decided he should be asked: “whether he paid the whole of his expenses in the above-mentioned race.” Only when he could prove that he had did the Bicycle Union concede that he was not a professional.