Luis Ocana won the 1973 Tour de France and 1970 Vuelta a España. During the 1971 Tour de France he launched an amazing solo breakaway that put him into the Yellow Jersey and stunned the rest of the main field, including back-to-back Tour champion Eddy Merckx, but abandoned in the fourteenth stage after a crash in the descent of the Col de Menté. Ocaña would abandon many of the Tours that he entered, but he finished in the top 5 of the Vuelta a España on seven occasions.

As the postal cards are quite old and one of a kind, please look carefully at the photos to determine the condition.

Jesús Luis Ocaña Pernía; (9 June 1945 – 19 May 1994) was a Spanish road bicycle racer who won the 1973 Tour de France and the 1970 Vuelta a España. During the 1971 Tour de France he launched an amazing solo breakaway that put him into the Yellow Jersey and stunned the rest of the main field, including back to back Tour champion Eddy Merckx, but abandoned in the fourteenth stage after a crash in the descent of the Col de Menté. Ocaña would abandon many of the Tours that he entered, but he finished in the top 5 of the Vuelta a España on seven occasions

Ocaña was born in Priego, Cuenca, Spain but his family moved to Mont-de-Marsan (Landes, France) in 1957. Ocaña took up racing with a club in Mont-de-Marsan and began his professional career in 1968 with the Spanish Fagor team, becoming Spanish champion that year. The following year he won the prologue and two time trials, the mountains classification as well as finishing second in the Vuelta an España.

In 1970, Ocaña signed with the French team Bic. In the 1970 Vuelta a España, he battled with Agustín Tamames, losing the leader’s jersey to him on the 13th stage. Ocaña performed well in the time-trial on the final day putting himself back into the Gold jersey as he won his first Grand Tour with an advantage of 1:18 over Tamames. The Spanish newspaper Dicen said Ocaña was “the best time-trialist that Spanish cycling has ever had”.  In the 1970 Tour de France, Ocaña won the stage to Puy-de-Dôme and finished 31st in the Tour.

Before the Tour de France, Ocaña finished third behind Eddy Merckx in Paris–Nice and second behind Merckx in the Critérium du Dauphiné Libéré. On the uphill finish of stage eight with four kilometers to go, Ocaña launched the decisive move and broke away from the favorites for that year’s Tour, which included Merckx. He succeeded in a 15-second gain on Merckx but built on that the following day. Then on stage 11 to Orcières-Merlette, Ocaña rode himself into the yellow jersey with eight minutes over Merckx.

After a rest day, Merckx cut that lead to 7 minutes, and in the Pyrenees, on the Col de Menté, Merckx attacked as he descended the mountain. Merckx lost control and skidded into a low wall. Ocaña could not avoid Merckx and fell himself. Merckx was up quickly and sped away. Ocaña struggled to release his cleats from the toe clips and was struck by the pursuing Joop Zoetemelk. The leader of the general classification lay on the ground screaming with pain. He was taken by helicopter to the hospital in Saint-Gaudens. He recovered but his 1971 Tour dreams had come to an end. The following day Merckx refused to wear the yellow jersey, in tribute to Ocaña. There is a memorial at the scene of the accident on the western side of the Col de Menté in the Pyrenees (at 42°54′55.9″N 0°44′37.7″E).

The following year, 1972, Merckx had intended on not participating in the 1972 Tour de France in order to ride the Vuelta a España for the first time, but due to critics saying that Merckx only won the Tour because of Ocaña’s fall, Merckx decided to ride. There was speculation of a duel. Ocaña had won the Critérium du Dauphiné Libéré and the national championship. In the Pyrenees, Ocaña repeatedly attacked Merckx without success, before withdrawing with bronchitis.

In 1973, Merckx decided to ride the Vuelta a España and Giro d’Italia. It was the first time that Merckx contested the Vuelta an España and that year he would not be contesting the Tour de France. Ocaña battled Merckx in the race with Bernard Thévenet also present. In the end, Ocaña finished second, almost 4 minutes behind Merckx.

Because Ocaña had only finished one of the four previous editions of the Tour de France that he had started, he was not considered a favorite for overall victory. Merckx, who was not competing, had picked José Manuel Fuente, Joop Zoetemelk and Raymond Poulidor for the podium. Indeed, Zoetemelk and Poulidor had finished first and second after the prologue while Ocaña crashed during the first stage when a dog ran into the peloton.  However, on the third stage, Ocaña and his team distanced their rivals. The stage began in Roubaix and when the peloton went over cobblestones at Querenaing, Ocaña, and four teammates together with six others, attacked, and gained five minutes at one point, although the chasing group reduced this to two and a half minutes at the finish. However, Fuente finished seven minutes back.

Ocaña won the first mountain stage and took the yellow jersey, while Thévenet won the second mountain stage. L’Equipe newspaper predicted a duel. However, on the third mountain stage, Ocaña delivered a crushing defeat to his rivals. Fuente attacked early on the Col du Télégraphe and a group of favorites was established. On the following climb of the Col du Galibier, Ocaña led. After the descent, Ocaña and Fuente had a minute on Thévenet, while the next group was five minutes and 30 seconds behind. Fuente suffered a flat tire and Ocaña won by 52 seconds over Fuente, almost seven minutes over Thévenet & Martinez, and 20 minutes & 24 seconds over Zoetemelk, Van Impe, and Poulidor. Ocaña then led the general classification by nine minutes over Fuente, ten minutes on Thevénet, with Zoetemelk fifth, over 23 minutes behind. Ocaña then won the stage 12 time trial. A duel in the Pyrenees was expected between Ocaña and Fuente but Ocaña won the longest stage in the Pyrenees. L’Equipe had the headline Ocaña appuie sur l’accélérateur translated as Ocaña steps on the accelerator. Ocaña won the last individual time trial and also the mountain stage to Puy-de-Dôme, eventually winning the race with 15 minutes over Bernard Thévenet. He also won the combativity award. After his win, Ocaña declared that after the 1974 Tour de France, he wanted to try the hour record.

After his win in the Tour de France, Ocaña finished third and won the bronze medal in the world championship road race. He also won the Vuelta Ciclista al País Vasco in 1973 and finished fourth in the 1974 Vuelta a España, won by Fuente. Ocaña was unable to defend his Tour de France win in 1974 due to an injury sustained during the Midi-Libre. He finished fourth again in the 1975 Vuelta a España. In 1976, he was back to top form and finished third in Paris–Nice and second overall in the Vuelta a España, a minute behind José Pesarrodona. 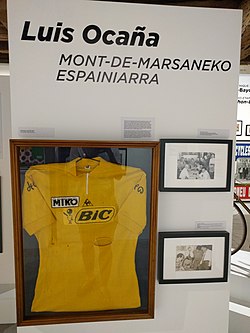 Ocaña retired at the end of 1977 after finishing 25th in the 1975 Tour de France. He had won 110 races including nine stages of the Tour de France. He retired to his vineyard in 1977. It is said that despite their rivalry on the road, Merckx organized for a Belgian distributor to order a sizeable quantity of wine from Ocaña’s ailing vineyard.