This stunning photo, by cycling photojournalist John Pierce, shows Eddy Merckx climbing the Allos during Stage 15 on what would turn out to be the last yellow jersey of Merckx’s storied career.

Eddy Merckx started the 1975 tour in excellent form after riding well in the Spring Classics winning his sixth Milan-San Remo, winning his second Tour of Flanders, Liege-Bastone-Liege for the fifth time and finishing second at Paris-Roubaix. Merckx was a favorite to win the 1975 Tour and be the first to win the Tour six times.

Merckx, in the yellow jersey, was punched by a spectator during the stage 14 climb of the Puy de Dome. After a rest day, the race resumed with stage 15, another mountain stage from Nice to Pra Loup. Merckx was suffering and blew up on the climb to Pra Loup, opening the door for Bernard Tevenet to attack to win the stage and the yellow jersey in Paris.

This lithograph was produced by renowned lithographers Phelps-Schafer on heavyweight archival stock.

In the early fall of 1997, I somehow persuaded Eddy  Merckx to make a stopover in the Bay Area as part of his trip to that year’s Interbike, then in Southern California. Over a relatively short period, my wife Shelly and I cobbled together a plan to have Eddy as our guest for a few days in San Francisco. It then evolved from a quiet visit to see our city into a public event at Stanford University co-starring Phil Liggett and Jim Ochowicz.

When we arrived at Stanford slightly ahead of schedule, Eddy requested to see the event space. I’m not sure if perhaps he expected to see a classroom or a bike shop. It was apparent Eddy did not anticipate a two-level, fully appointed auditorium. He was genuinely surprised to learn the event was sold out, commenting he had no idea there could be this many people in the Bay Area who even knew his name.

The pre-event reception was a catered affair, and nearly everyone who attended wanted a photo with Eddy, be it the tech CEO or a newly made fan. After the reception, we made our way to the auditorium. Introductions of the honored guests came one by one, and the house roared as Eddy emerged from behind the curtain. The next hour flew by as Eddy, Phil, and Och chatted about everything from Eddy’s childhood idols to contemporary racing. The event could have lasted three hours, and no one would have left early. Eddy had the audience eating out of his hand. Fortunately, the Stanford Cycling Team made sure to arrange the filming of the event. Every now and again, I dig up the VHS tape, now converted to DVD, and watch the magic. It never gets old. – Brett Horton 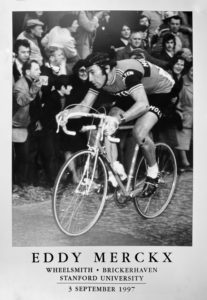 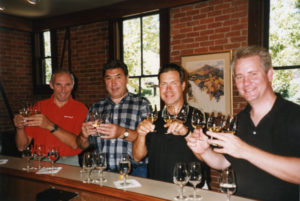 Eddy Merckx  – One of the Three Full-Size Lithographs made for the Event
Phil Liggett, Eddy Merckx, Jim Ochowicz, and Brett Horton (L to R) earlier in the day.