This amazing image captures Renault-Elf-Gitane teammates Bernard Hinault, Pascal Poisson & Lucien Didier walking off the plane on a rainy rest day transfer. Hinault went into the rest day in a strong position overall. He was sitting comfortably in third 1’02” behind race leader Phil Anderson with Sean Kelly in second place.

This 1982 Tour de France photo came out of a larger Presse Sport Photo album. Each photo is held to the description page with photo corners; no glue or tape was used.

Hinault, who had won the Tour in 1978, 1979, and 1981, and left the 1980 Tour in the leading position, was the clear favorite to win. In those other years, Hinault had won several races before the Tour, but in 1982 he had only won one major race, the 1982 Giro d’Italia. Hinault wanted to be the fourth cyclist, after Fausto Coppi, Jacques Anquetil and Eddy Merckx to win the Giro-Tour double.

Notable absent in 1982 was Lucien Van Impe, who was second in the 1981 Tour de France, winning the mountains classification. Since the 1969 Tour de France, Van Impe had started each edition, winning the general classification in the 1976 Tour and the mountains classification five times. Van Impe wanted to ride, but his Metauro Team was not invited, as the organization considered it not strong enough to ride both the Giro and the Tour. Van Impe tried to find a team to hire him only for the 1982 Tour but was not successful.

Even though Joop Zoetemelk was 35 years old and no longer considered a favorite, he still managed to finish in second place for the sixth and final time. 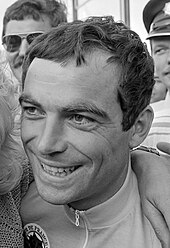 Bernard Hinault (pictured in 1982), winner of the general classification

The Prologue was won by Hinault who finished seven seconds faster than Gerrie Knetemann. In Stage 1 Ludo Peeters escaped to win the stage by 0:38 over the main field leaving Sean Kelly and Jan Raas to sprint for 2nd place and in conjunction with the time bonus for winning the stage, Peeters moved into the overall lead by 0:14 over Hinault.

Stage 2 included a rare climb up the Ballon d’Alsace in northeastern France, which was a popular climb in the 1930s TDF editions, but this was only the 3rd time it had been included in the route since World War II. Bernard Vallet would attack the climb for the KOM points but Phil Anderson would win the stage and for the second year in a row and don the Yellow Jersey for at least a day. Vallet moved into 2nd 0:38 behind Anderson as Peeters fell to third. Hinault ended up in 7th nearly a minute down, strangely setting the stage for a repeat of the surprise from the year before when Anderson became a challenger to Hinault in a similar manner to Cyrille Guimard becoming the only realistic challenger to Eddy Merckx during the 1972 Tour de France.

Stage’s 3 and 4 were won by Daniel Willems and Gerrie Knetemann who would each win the final two stages of their TDF careers in 1982. In the Points Competition Sean Kelly took command of the Green Jersey having been competitive in the sprints, would not relinquish it the rest of the Tour and due to time bonuses, he moved into 2nd place overall. Stage 5 was a TTT that began no different than any other Team Time Trial but during the stage, angry ironworkers from the Usinor steel company blocked the road and interrupted the stage to the point it had to be postponed. Stage 6 was won by Raas handily, leaving Jos Jacobs and Pierre La Bigaut to sprint for 2nd five seconds later and Stage 7 was decided in a sprint finish by Pol Verschuere.

Stage 8 was a circuit finish with fifteen laps of a 6 km course planned in the city of Chateaulin. French rider Régis Clère devised a plan to escape the Peloton and arrive in the town far ahead of the other riders in an attempt to question whether or not it would be legally within the rules to reach the circuit and complete the first lap and then follow in the slipstream of the main field once they arrived on the course and coast his way to victory riding at the back of the pack. Unfortunately for Clère, even though at one point he had built up about a ten-minute gap, he would end up getting a flat tire and then suffer a mechanical, costing him so much time that the main field would catch him before he reached town and following the laps around the circuit Frank Hoste would end up out sprinting Claude Criquielion and Bruno Leali in a bunch finish.

Stage 9A was the TTT originally scheduled as stage 5 and Tour organizers decided to have the riders’ actual times only count towards the general classification in the overall team race as individually riders were awarded time bonuses. As a result, Anderson remained in the overall lead but due to the solid 2nd place finish of Team Renault-Elf-Gitane Hinault was now in 2nd place just 0:28 off the lead. Winning the stage was the consistently dominant Ti Raleigh-Campagnolo-Merckx squad, who caused Kelly, Clére, Willems, and Vallet to each drop in the standings as Raleigh now had four riders in the Top 10 overall with Johan Van der Velde being their primary GC contender now sitting in 8th place at 1:53 behind.

The originally scheduled Stage 9 was now Stage 9B and was won by Stefan Mutter who crossed the line 0:58 ahead of 2nd place Pierre-Raymond Villemiane and had more than a minute advantage over the main field. Villemiane would win Stage10, besting the likes of Kelly, Raas, and Eddy Planckaert by two seconds as the overall situation remained the same going into the ITT prior to the start of high mountain stages in the Pyrenees.

The individual time trial in Stage 11 was won by Gerrie Knetemann who beat Hinault by 0:18. The last time Knetemann had beaten Hinault in a TDF ITT was in the Prologue of the 1979 Tour de France. However, since that time, Knetemann was among the very few riders able to ride individually at the same level as Hinault, having come within 0:30 of “The Badger” on five occasions and just ten seconds on three occasions. Aside from Hinault out of the 125+ riders still in the Tour at this point only Jan van Houwelingen, Joop Zoetemelk and Daniel Willems finished within 2:30 of Knetemann’s time. Phil Anderson finished more than 3:00 back falling to 3rd place in the overall standings meaning he was now more than 2:00 behind the new overall leader Hinault. The sportswriters were correctly beginning to fear that Hinault was going to run away with his 4th Tour victory as 2nd place Knetemann was not considered an overall threat to the yellow jersey. Aside from Anderson in 3rd, the only other rider remotely close to Hinault was the now 7th placed Zoetemelk, who might have given Hinault one of his only serious challenges between 1978-1980, but at this point, Zoetemelk was pushing 36 years old, was one of the oldest riders in the peloton and admitted, just as he had in his very first Tour back in the 1970 Tour de France against Merckx, that he was up against the greatest rider in the world and was only riding to beat everybody else.

Stage 12 would be the first high mountain and bring clarity to the overall situation,  included a climb of the Col d’Aubisque. Sean Kelly survived with the elite riders and was, thus, able to win the stage by outsprinting Anderson and Van de Velde at the finish. Zoetemelk, Vallet, and Hinault also came across in good order with Hinault leading 2nd place Anderson by 2:03, Zoetemelk by 4:26, and everybody else by well over 5:00. Stage 13 included the Col d’Aspin and was won by Swiss rider Beat Breu who soloed across the finish ahead of the GC riders by 0:35 starting with Robert Alban in 2nd. Hinault kept Zoetemelk close all day and crossed five seconds ahead of him as Anderson and Van der Velde were dropped and lost about a minute apiece.

Following the rest day before immediately going to the French Alps was another individual time trial (Stage 14), which this time was won by Bernard Hinault, who only had Houwelingen, Vallet, Zoetemelk, and Daniel Gisiger finish within a minute of him as he now led everybody in the overall situation by more than 5:00. Stage 15 was won by Pascal Simon, who was able to stay away from Pierre-Henri Menthéour to take the stage as Hinault. Even though he finished outside the top 10 on the stage, he now had everyone except for Zoetemelk getting close to, or already beyond a 10:00 deficit.

Stage 16 included the famed climb Alp d’Huez and was almost a repeat in the top 5 from stage 13 with Beat Breu winning the day, and Alban, Alberto Fernandez, and Raymond Martin being the following riders to cross the finish. Hinault came across comfortably in 5th with Zoetemelk and Peter Winnen accompanying him.

Stage 17 was won by Winnen, who moved into 3rd place overall 7:13 behind Hinault, who kept Zoetemelk marked all day and led the elite riders across the line some two and a half minutes after Winnen methodically hammering out the final kilometers in the mountains with his 4th Tour victory in five years all but assured. Also, on this stage, Bernard Vallet ended up being dropped by the GC favorites and fell out of the top 10 overall. Still, he had gained enough points in the King of the Mountains competition to assure himself of the victory over Jean-René Bernaudeau. As long as he finished the final few stages he would be wearing the Polka Dot Jersey on the podium in Paris.

In Stage 18 Adri van Houwelingen won the day by surviving a solo breakaway finishing 10:31 ahead of the rest of the field. Stage 19 was the final time trial of the Tour, and without much drama, in the air, the stage was won by Hinault with Gerrie Knetemann 0:09 behind him. As a result, the final overall standings seemed to be in place with Anderson in 5th, Winnen falling back to 4th, Van der Velde jumping up to 3rd with Hinault and Zoetemelk remaining 1st and 2nd respectively.

Stage 20, a sprint finish, was won by Daniel Willems.  Going into the final stage on the Champs Elysees, many in the press had accused Hinault of riding a boring race, even though he was about to become a four-time Tour de France champion. Hinault responded on the final day of racing (Stage 21) by risking crashing and getting injured by getting to the front of the pack once the race hit the circuit finish on the Champs Elysees, where he was able to outsprint the likes of Yvon Bertin, former Green Jersey winner Rudy Pevenage, a surprising Paul Sherwen, Fons de Wolf and everybody else dreaming of glory to seize the biggest sprinter’s stage of them all.

On the final podium in Paris, the Most Combative Rider award went to Régis Clère, Bernard Vallet won the Polka Dot Jersey, the Points Competition was won by Sean Kelly, which he would win three more times in his career, the Best Young Rider was won by Phil Anderson ahead of Kim Andersen and Marc Madiotand. Coop-Mercier-Mavic won the Team Competition. In 3rd place on the overall podium was Johan Van der Velde, in 2nd place for 6th and final time, setting a record that will likely never be equaled was Joop Zoetemelk, who also set a record for his 11th Top 5 finish and joining the likes of Coppi, Anquetil, and Merckx by winning the Giro-Tour double was Bernard Hinault.