1980 was the 71st edition of the legendary Spring Classic Milan – San Remo.  The day was won by Pierino Gavazzi (ITA) with Guiseppe Saronni (ITA)  and Jan Raas (NED) taking second and third.

In the racing of today, the race organizer cars, team vehicles, and other participants of the official race caravan have disposable stickers that are affixed to the windshield. Slipping a bit into the way back machine, there was a time when the cars had plaques that were attached to the front of the follow cars.

As with most things ephemeral, the majority of the plaques were promptly tossed in the trash once the race was finished. The ones that survived have become quite collectible.

Milan–San Remo (in Italian Milano-Sanremo), also called “The Spring Classic” or “La Classicissima“, is an annual road cycling race between Milan and Sanremo, in Northwest Italy. With a distance of 298 km (~185.2 miles), it is the longest professional one-day race in modern cycling. It is the first major classic race of the season, usually held on the third Saturday of March. The first edition was held in 1907.

It is traditionally the first of the five Monuments of the season, considered to be one of the most prestigious one-day events in cycling. It was the opening race of the UCI Road World Cup series until the series was replaced by the UCI ProTour in 2005 and the World Tour in 2011.

The idea of a bike race between Milan and Sanremo originated from the Unione Sportiva Sanremese. A first amateur race was held on 2 and 3 April 1906 over two stages (Milan–Acqui Terme and Acqui Terme–Sanremo); albeit with little success. Milanese journalist Tullo Morgagni, who had launched the Tour of Lombardy in 1905, put forth the idea of organizing a professional cycling race in a single day over the course. He proposed the project to Eugenio Costamagna, the director of the popular sports newspaper Gazzetta dello Sport, who took on the organization. 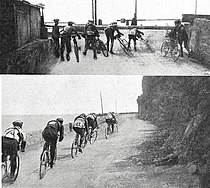 On 14 April 1907 the first official edition of Milan–San Remo was held. The start was at the Conca Fallata inn of Milan at 5 a.m. Sixty riders registered, but only 33 took the start. The inaugural contest was especially hard as it was affected by exceptionally cold weather. It was won by Frenchman Lucien Petit-Breton, who completed the 286 kilometers (177 miles) in an average speed of 26.206 km/h (16.5 mph). Only 14 riders finished.

The race was a commercial success and attracted some of the best riders of European cycling, prompting the Gazzetta dello Sport to organize a second edition in 1908, won by Belgium’s Cyrille Van Hauwaert. The first Italian winner of Milan–San Remo was Luigi Ganna who won in 1909 by an hour over Frenchman Emile Georget.

In 1910 the Primavera gained eternal fame and a place in cycling legend because of the extreme weather conditions. Riders needed to take refuge in the houses along the roads because a severe snowstorm scourged the peloton. Just four out of 63 riders finished the race. Frenchman Eugène Christophe won, even though he thought he had taken the wrong road and did not realize he was the first to reach Sanremo. Christophe finished the race in 12 hours and 24 minutes, making it the slowest edition ever. Giovanni Cocchi finished second at 1h 17 minutes from the winner.

Costante Girardengo was honored for his win in the 1923 Milan–San Remo.

After the pioneering days of the race, began the era of Costante Girardengo, who connected his name indelibly to the classic. From 1917 to 1928 Girardengo had a record 11 podium finishes, six times as winner. Subsequent years were marked by the rivalry between Learco Guerra and Alfredo Binda, whose emulation caused them to lose several certain victories. A similar rivalry was the one in the 1940s with the mythical years of Fausto Coppi and Gino Bartali, whose duels were the subject of intense coverage and resulted in epic races.

Milan–San Remo was at the peak of its popularity and the Italian press started to coin the untranslatable term La Classicissima, the greatest of all classics. From 1935 to 1953 the race was run every year on 19 March, the feast of patron Saint Joseph, hence the press in predominantly Catholic Italy gave it its other nickname, la Gara di San Giuseppe (Saint Joseph’s Race). In 1949 the race finished for the first time on the iconic Via Roma, a busy shopping street in the heart of Sanremo.

From the 1950s, the race was mainly won by Belgian and Spanish sprinters, and after 1953, Italian riders could not seal a victory for 17 years. In 1960 race director Vincenzo Torriani added the climb of the Poggio, just before the arrival in Sanremo. The intent was to make the race finale harder, but the decision did not have the aspired effect and the streak of non-Italian victories continued.

In 1966 began the legendary era of Eddy Merckx, who achieved an unsurpassed record of seven victories. Seven wins is also the record number of victories by a rider in a single classic to date. After the Cannibal’s streak, no rider could dominate Milan–San Remo again until 1997, when German Erik Zabel began a series of four victories and two-second places.

Italian Sprinter Alessandro Petacchi won the 2005 Milan–San Remo in a group sprint on the Via Roma.

In 1990 Italian Gianni Bugno set a race record of 6h 25 m 06 seconds to win by 4 seconds over Rolf Gölz, averaging 45.8 kmh (28.45 mph). Another memorable running was the one in 1992 when Seán Kelly caught Moreno Argentin in the descent of the Poggio and beat the Italian in a two-man sprint. It was Kelly’s penultimate career win. In between Erik Zabel’s wins, Andrei Tchmil won the 1999 contest, after he launched a decisive attack under the one-kilometer banner and narrowly stayed ahead of the sprinting peloton, with Zabel coming in second place.

In 2004 Zabel could have won a fifth time, but lost to Óscar Freire only because he lifted his arms to celebrate and stopped pedaling too early. Freire would go on to secure a total of three Primavera wins in later years.  In 2008 the finish was moved to a different location for the first time in 59 years, due to road works on the Via Roma. Swiss Fabian Cancellara was the first winner on the Lungomare Italo Calvino, after an ultimate solo attack in the streets of San Remo.

In 2009 the 100th edition of Milan–San Remo was held, won by British sprinter Mark Cavendish on his first attempt. Cavendish beat Australian Heinrich Haussler in a millimeter sprint.

Michał Kwiatkowski won the 2017 contest in a three-man sprint with Peter Sagan and Julian Alaphilippe.

The race of 2013 was affected by abysmal weather conditions from start to finish. Heavy snowfall and below-zero temperatures forced organizers to shorten the race by 52 kilometers (32 miles) eliminating two key climbs – the Passo del Turchino and Le Manie – and arranging a bus transfer for the race to begin a second time. The race was won by German Gerald Ciolek who outsprinted Peter Sagan and Fabian Cancellara.

In 2015 race director Mauro Vegni decided to move the finish back to the Via Roma after seven years on the seaside, stating the change would be for 2015 and beyond. German John Degenkolb won the race ahead of the previous winner Alexander Kristoff. The 2016 race was won by French sprinter Arnaud Démare in a bunch sprint, but Démare was accused after the race of having used the tow of his team car to rejoin the pack on the Cipressa climb. Démare rebuffed these allegations, stating that the race commissioners were right behind him and would have disqualified him had he done something illegal.

In 2017 Michał Kwiatkowski became the first Polish winner of a monument in a three-up sprint finish with world champion Peter Sagan and Julian Alaphilippe after the trio broke clear on the race’s final climb – the Poggio di San Remo.

The 2020 edition was forced to move to August due to the COVID-19 pandemic in Italy, making it the first-ever summer edition of the Spring classic. The edition was won by Belgian Wout van Aert.