In addition to being one of the few years that were double-sided Tour/Avenir, this flag comes with the original full length dowel. Combined with a great year, and Anquetil’s win, this is a great display piece.

In a tradition started with the first Tour de France in 1903, these flags were affixed to wood dowels and placed in special holders on race official cars. These flags were used well into the 1960s. For 20+ years after that, the flags were used by officials and course marshals to warn riders of oncoming danger. What is particularly appealing is during the period from post-WWII until the late 1960s, the flags had the year clearly visible. As time has marched on, the desirability of these flags has grown, with particular interest given to the years where the winner was also considered a great champion.

This unique two-sided flag was created for both the 1964 Tour de France and Tour de l’Avenir.

Going into the 1964 Tour the race favorite was defending champion Jacques Anquetil. He had won the 1964 Giro d’Italia earlier that year and was trying to win a Tour-Giro double, which at that time had only been acheived by Fausto Coppi.  The 1964 Tour turned out to be an epic battle between Anquetil and Raymond Poulidor for the Yellow Jersey.

1964 was the 4th edition of the Tour de l’Avenir.  Until 1967 the race took place earlier in the day, but on the same course at the Tour de France.  It was created to attract teams from nations that had no professional riders to enter the Tour de France. Felice Gimondi, an Italian amateur was the victor in 1964 with Lucien Aimar and Ginés Garcia taking second and third.

The 1964 Tour de France was the 51st edition of the Tour de France, one of cycling’s Grand Tours. It took place between 22 June and 14 July, with 22 stages covering a distance of 4,504 km (2,799 mi). Stages 3, 10, and 22 were all two-part stages with the first half being a regular stage and the second half being a team or individual time trial. It was the only Tour de France to include a mid-stage climb to the L’Alpe D’Huez ski resort. The race was eventually won by Jacques Anquetil following an epic shoulder-to-shoulder battle with Raymond Poulidor during stage 20. 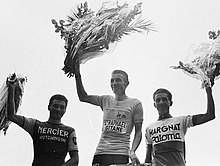 Anquetil, who was looking for his fifth Tour victory, was superior in the time trials, of which he won all three. But Raymond Poulidor dominated in the mountains, and Anquetil was close to losing.

In the second part of the tenth stage, the time trial, Anquetil won. Poulidor finished in second place, losing 36 seconds, with a flat tire costing him some time.

In the rest day between the thirteenth and the fourteenth stage, Anquetil had joined a lamb barbecue, and in the fourteenth stage, he was immediately dropped. His team director gave him a bottle of champagne, which washed away the indigestion, and then Anquetil was able to get back to Poulidor. Poulidor then broke a spoke, the repair cost him some time, even more, because a team mechanic, trying to help him gain speed, made him fall.

Poulidor attacked in the fifteenth stage and stayed away. He won the stage, and in the general classification climbed to third place, nine seconds behind second-placed Anquetil.

Anquetil won the time trial of stage 17, and became the leader; Poulidor was in second place, only 56 seconds behind. In the twentieth stage, Poulidor did not have the right bicycle for the climb but did not tell his team director. Poulidor dropped Anquetil in the climb, but the margin was not big enough for him to take over the lead, and Anquetil remained leader of the race by 14 seconds.

In the final time trial, Anquetil was the favorite, being the specialist. Poulidor rode as fast as he could, and with all other cyclists but Anquetil finished, had the best time. Anquetil was the last rider to ride the time trial and was five seconds slower at the intermediate time check, which gave Poulidor hope that he could emerge as the winner. However, Anquetil was clearly faster in the second part and won the time trial. Anquetil won the Tour by only 55 seconds,  which was at that moment the smallest margin in history.

Classification leadership and other prizes

There was also a mountains classification. The organization had categorized some climbs as either first, second, third, or fourth-category; points for this classification were won by the first cyclists that reached the top of these climbs first, with more points available for the higher-categorized climbs. The cyclist with the most points lead the classification but was not identified with a jersey.

For the team classification, the times of the best three cyclists per team on each stage were added; the leading team was the team with the lowest total time. The riders in the team that led this classification wore yellow caps.

In addition, there was a combativity award, in which a jury composed of journalists gave points after certain stages to the cyclist they considered most combative. The split stages each had a combined winner. At the conclusion of the Tour, Henry Anglade won the overall super-combativity award, also decided by journalists. The Souvenir Henri Desgrange was given in honor of Tour founder Henri Desgrange to the first rider to pass a point by his final residence, the “Villa Mia” in Beauvallon, Grimaud, on the French Riviera on stage 10a. This prize was won by André Darrigade.