In addition to being one of the few years that were double-sided Tour/Avenir, this flag comes with the original full length dowel. Combined with a great year, and Anquetil’s win, this is a great display piece.

In a tradition started with the first Tour de France in 1903, these flags were affixed to wood dowels and placed in special holders on race official cars. These flags were used well into the 1960s. For 20+ years after that, the flags were used by officials and course marshals to warn riders of oncoming danger. What is particularly appealing is during the period from post-WWII until the late 1960s, the flags had the year clearly visible. As time has marched on, the desirability of these flags has grown, with particular interest given to the years where the winner was also considered a great champion.

This unique two-sided flag was created for both the 1961 Tour de France and Tour de l’Avenir.

The 1961 Tour de France was dominated by Jacques Anquetil who held the yellow jersey from Stage 1b all the way to the finish in Paris.  The big battle on the road was for second place with Guido Carlesi stealing second place from Charly Gaul on the last day by two seconds.

1961 was the inaugural edition of the Tour de l’Avenir.  Until 1967 the race took place earlier in the day, but on the same course at the Tour de France.  It was created to attract teams from nations that had no professional riders to enter the Tour de France.  Guido De Rosso, an Italian amateur was the victor in 1961.

The 1961 Tour de France was the 48th edition of the Tour de France, one of cycling’s Grand Tours. It took place between 25 June and 16 July, with 21 stages covering a distance of 4,397 km (2,732 mi). Out of the 132 riders who started the tour, 72 managed to complete the tour’s tough course. Throughout the 1961 Tour de France, two of the French national team’s riders, André Darrigade and Jacques Anquetil held the yellow jersey for the entirety 21 stages. There was a great deal of excitement between the second and third places, concluding with Guido Carlesi stealing Charly Gaul’s second-place position on the last day by two seconds. 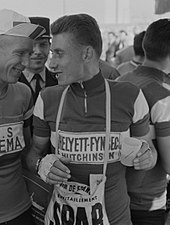 Since Jacques Anquetil had won the 1957 Tour de France, he was unable to repeat it, due to illness, tiredness, and struggle within the French team. For 1961, he asked the team captain Marcel Bidot to make a team that would only ride for him, and Bidot agreed. Anquetil announced before the race that he would take the yellow jersey as leader of the general classification on the first day, and wear it until the end of the race in Paris.

Gastone Nencini, who won the previous edition, did not enter in 1961, but Graziano Battistini, his teammate, and runner-up of 1960, started the race as leader of the Italian team. If the French team would again have internal struggles, the Italian team could emerge as the winner.

The Spanish team had two outsiders, José Pérez Francés and Fernando Manzaneque. The last outsider was Charly Gaul, winner of the 1958 Tour de France, who rode in the mixed Luxembourg/Swiss team. He considered his teammates so weak that he did not seek their help, and rode the race on his own.  Raymond Poulidor was convinced by his team manager Antonin Magne that it would be better to skip the Tour because the national team format would undermine his commercial value.

André Darrigade won the opening stage, and it became the fifth time that he won the opening stage. Darrigade had been in a small group that broke away, which included Anquetil. Other competitors, such as Gaul and Battistini, already lost more than 5 minutes.  After that, there was a time trial, won by Jacques Anquetil. Anquetil became the leader of the race, with his teammate Joseph Groussard in second place, almost five minutes behind him.

The second stage, run in bad weather, featured small roads in Northern France. Several cyclists got into problems, and seven cyclists already had to leave the race; the favorites were not harmed. In the sixth stage, West German Horst Oldenburg fell down on the descent of the Col de la Schlucht, and the Dutch team captain Ab Geldermans ran into him. Geldermans was taken to the Belfort hospital by helicopter, and the Dutch team had lost its captain.

Unlike previous years, the French team continued without fights and won five of the first eight stages. The ninth stage included four major climbs. On the second climb, Gaul escaped. He crashed on the descent of the third mountain, but managed to stay away and win the stage; Anquetil was not far behind and kept the lead.  Anquetil had a five-minute margin on the second-placed rider, which was Manzaneque. In the eleventh stage, Graziano Battistini was hit by a car and had to leave the race. This situation had not changed when the sixteenth stage started. It was expected that Gaul, in third place more than six minutes behind, would attack, but this did not happen, because Gaul had been injured in his crash in the previous stage.

The last chance for the opposition to win back time on Anquetil was in the seventeenth stage, but Anquetil stayed close to his direct competitors, and only allowed lower classified riders to escape. The press criticized Anquetil’s tactics, saying he was riding passively. In the nineteenth stage, an individual time trial, Gaul was on his way to winning back a little time on Anquetil, when he crashed heavily, and could not find his pace again. Anquetil won almost three minutes on Gaul and extended his lead to more than ten minutes.

In the final two stages, Anquetil did not get into problems. His main rival Gaul even lost time in the last stage and conceded his second place to Guido Carlesi.