The 1948 Tour de France was won by Italian cyclling legend Gino Bartali, who had also won the Tour in 1938. Bartali had almost given up during the race, but drew inspiration from a phone call from the Italian prime minister, who asked him to win the Tour de France to prevent civil unrest in Italy after assassination attempt against Togliatti. Bartali also won the mountains classification, while the team classification was won by the Belgian team.

Note:  The fabric armband does have stains and some discoloration.

This item is one of a kind; please look carefully at the photos to determine the condition.

The race was won by Italian cyclist Gino Bartali, who had also won the Tour de France in 1938. Bartali had almost given up during the race but drew inspiration from a phone call from the Italian prime minister, who asked him to win the Tour de France to prevent civil unrest in Italy after an assassination attempt against Italian politician Palmiro Togliatti. Bartali also won the mountains classification, while the Belgian team won the team classification.

The prize for wearing the yellow jersey was introduced in 1948, sponsored by Les Laines, a French wool company. In 1947, the media had complained that too many cyclists reached the end of the race, so the race was no longer heroic; this may have motivated a new rule between the third and the eighteenth stage, the rider last in the general classification was eliminated;  Whereas the 1947 Tour de France had been France-centred, the 1948 race became a more cosmopolitan race.

The Tour visited the Saar protectorate for the first time when the 18th stage passed Saarbrücken and Saarlouis. A second visit took place in 1953.

The first live television broadcast from the Tour de France was in 1948 when the arrival at the velodrome of Parc des Princes was broadcast live. 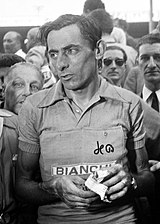 After there had not been an official Italian team allowed in the previous edition, the Italians returned. The Italian cyclists were divided between Gino Bartali and Fausto Coppi. Both argued in the preparation for the race about who would be the team leader. The Tour organization wanted to have both cyclists in the race, allowing the Italians and Belgians to enter a second team.  In the end, Coppi refused to participate, and Bartali became the team leader. However, the organization still allowed the Italians and Belgians to enter a second team. They were composed of young cyclists and named the Italy Cadets and the Belgium Aiglons.

The Tour organization invited the Swiss to send a team, as they wanted Ferdinand Kübler, the winner of the 1948 Tour de Suisse, in the race. Kübler refused this because he could earn more money in other races. However, when the brothers Georges and Roger Aeschlimann announced that they wanted to join the race, they were quickly accepted, especially because they were from Lausanne, where the Tour would pass through. They were put on a team with eight non-French cyclists living in France and were named the Internationals.

The teams entering the race were:

Bartali’s three stage wins in a row was the last time that happened, until Mario Cipollini achieved four in a row in 1999. There were five rest days, in Biarritz, Toulouse, Cannes, Aix-les-Bains and Mulhouse. The highest point of elevation in the race was 2,556 m (8,386 ft) at the summit tunnel of the Col du Galibier mountain pass on stage 14.